Happy 1st of May everybody!

The weather over here in LA has cleared up and someone moved the Arizona heat here for a little bit. I love it.. I wish it could stay like this for the rest of the year.

Last few weeks have been pretty busy and there’s a lot of anxiety in the air.. Most of it is the best kind though 😉

The main event of it was of course my tour with TIJUANA BULLFIGHT. It was about 2 weeks in total and we went through Tempe, Arizona; Las Vegas, Nevada; Salt Lake City, Utah, Seattle, Washington and Oakland, California.

For one, the tour was really cool. The big worry in everyone’s mind is always, how well it’s gonna go with staying in small spaces with the same people for extended amounts of time. That was definitely one of the main thing that a lot of my teachers at Musicians Institute told me that when bands and artists are looking for musicians to play live shows and to go on tours with, then the deciding factor is not the playing, but the personality. If you’re a cool guy to hang out with, but aren’t maybe the best player of the people auditioning then you will still be chosen rather than the guy who is an exceptional player, but not as easy to be around with. No one wants drama and complications on tour and you have to be as easygoing as possible, when it comes to touring

I’m happy to say that with those guys, there was no worry what so ever. They’re super cool and fun to hang out with and that’s a big part of making the tour successful. 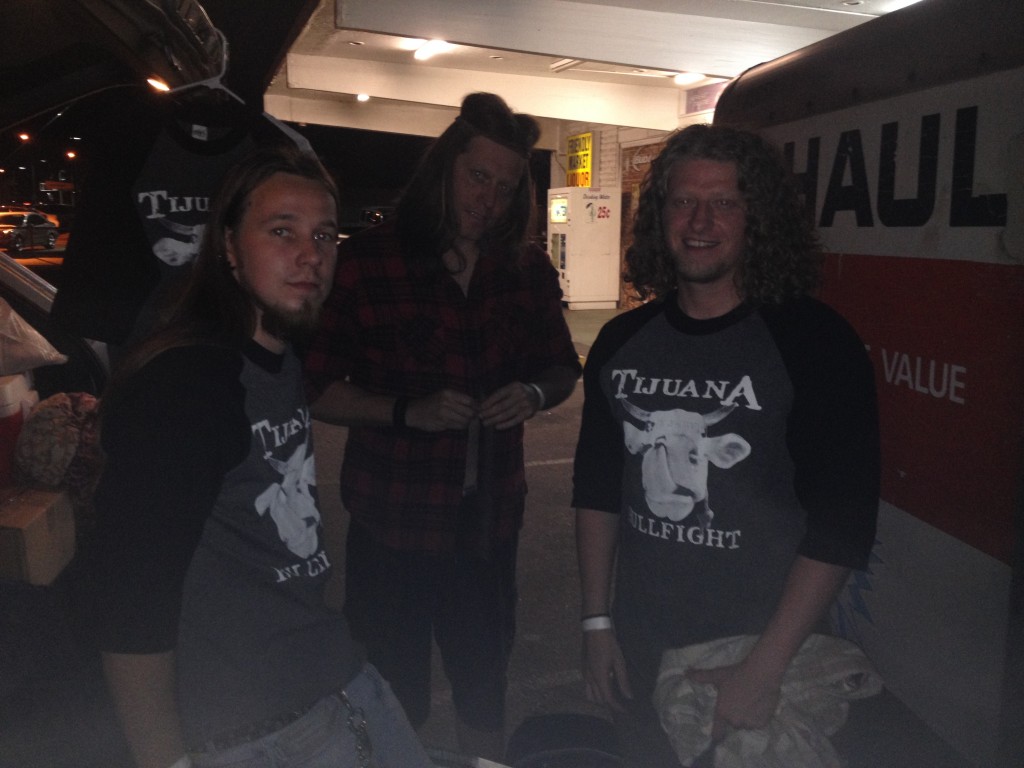 The places that we played were mostly local rock n’ roll bars where you can see right away that there’s some SERIOUS rocking gone over those stages 😛
They’re all relatively small places, but that is not the point of them at all.. 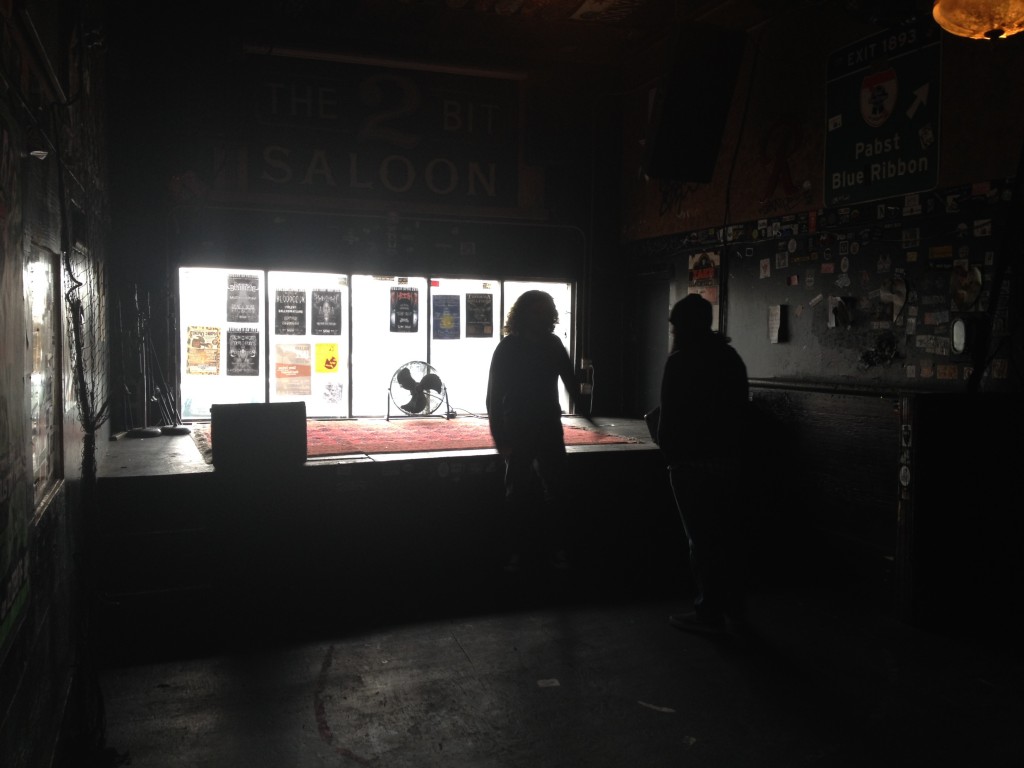 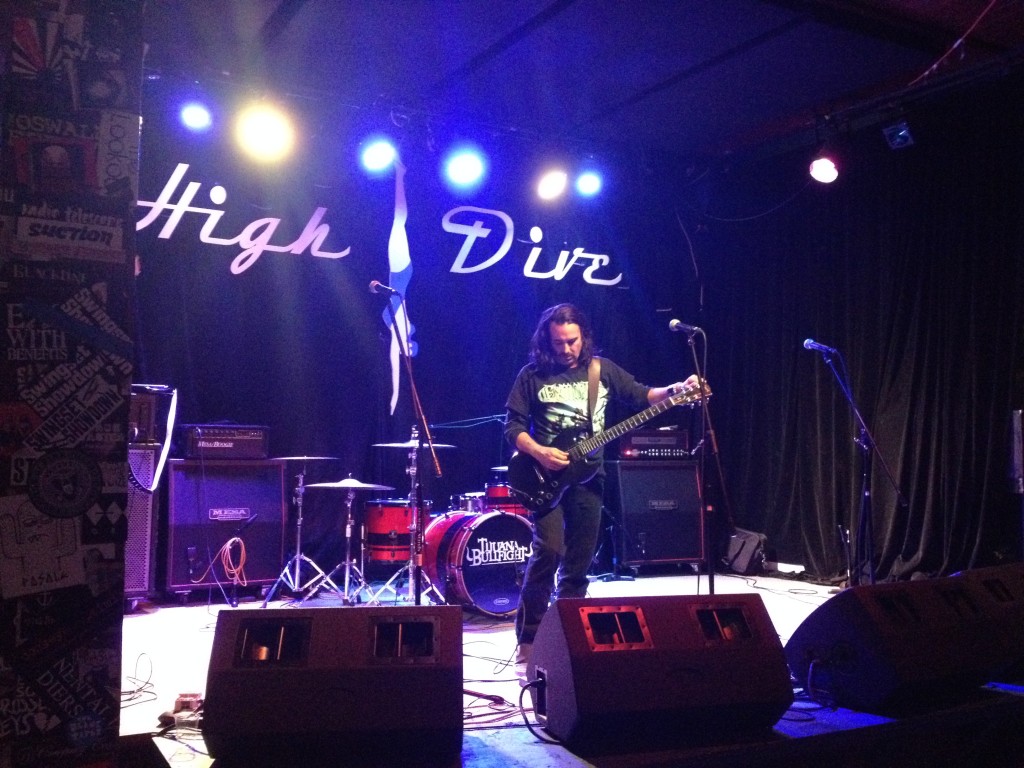 Of course everything has its problems as well… When playing in small venues like that, then often you find that there’s no backstage room or any other area where to put all your gear before you set it up on stage. So what ends up happening is that especially the drummer, since he’s got the most pieces to put together and that takes the most time, then you’d have to pre-set everything outside the venue – on the street. My biggest worry was that I was trying to keep an eye on all of the bags and cases once I had everything out..
Unfortunately there is no way out of it unless you’re playing in bigger venues. 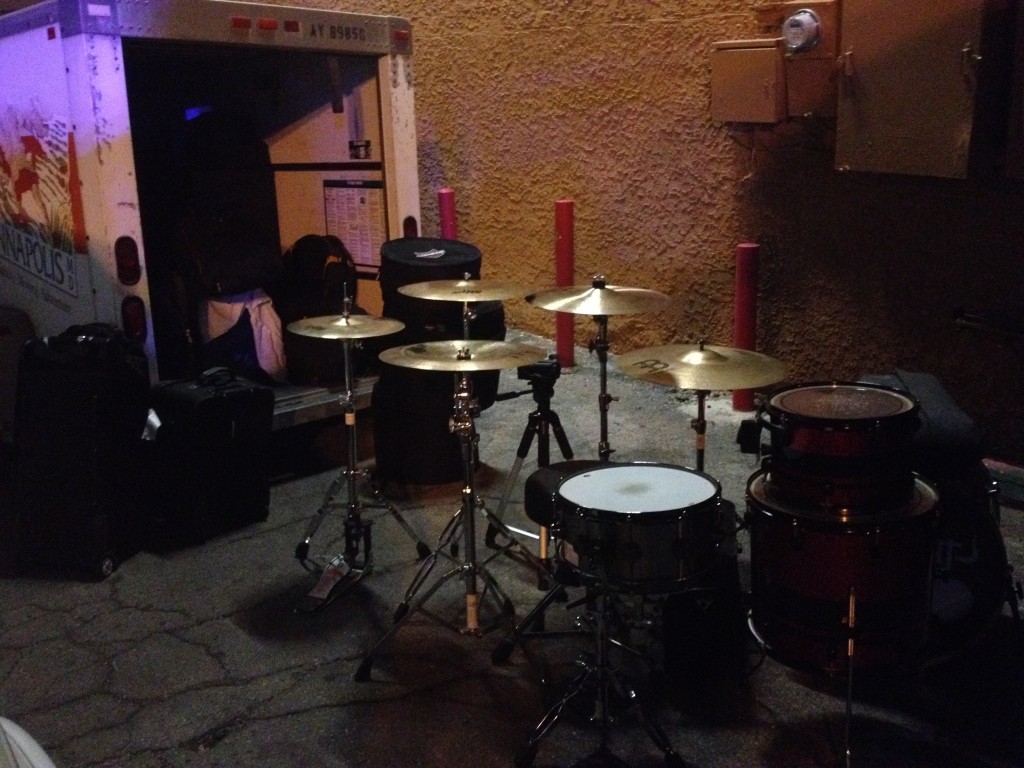 Here comes the top tip of the day! Be prepared to kill a lot of time! In the typical situation that we encountered on this tour, since we drove by car and hauled a trailer with our gear, then we didn’t have the option of just pull over anywhere and relax. After waking up in the morning we spent at least 6-7 hours on the road to get to the next city. Looking at the sights by the highway is nice, but the drive is still pretty hard on the body.
Then usually you’d get to the new place early (just in case), before the venue even opens and you’re left hanging.. Not enough to check into a room, but too long to just wait it out in the car. Starbucks with their free WIFI is quite helpful in these situations 😀 it’s the only place that allows public loitering 😀
If you like to read, bring lots of books, music on your phone/mp3 player or something like that. At this point any entertainment solution is good to have.

Another good tip is to bring items that would make you feel the most like home. Pillow and a blanket are good to have. Even if you’re not picky about sleeping with different pillows at motels and such, then after a week of doing so, your neck will start to feel the strain and that just wears you out…you’d get tired very quickly and every day is more and more difficult to get by. 2 weeks is manageable and it depends on the person, but after the first week it would start sinking in..
Comfortable clothes and shoes would be nice to have

On this tour I didn’t have my pillow, but I had a random blanket with me. I didn’t think it would matter much for 11 days, but my body wasn’t used to the positions, situations etc and I felt tired and oh, it was SO good to be back. So when you’re leaving on tour for more than a week, think very hard of your in-house habits and comfort. Obviously you can’t bring your bed, but having key-items with you could make the biggest difference!

So a couple of mention-worthy situations:

The third stop of the tour was in Las Vegas by the Hard Hat bar. It was a last minute show that the band was able to book, so we didn’t have too much information on it before we got there. Turned out that the show was going to be on a stage-bus that was parked in the parking lot of the bar. The bus opened up and the stage got to be a surprisingly decent sized. I’ve never played on a stage-bus before. Nor have I ever played on a stage that would move around as much. The suspension was quite soft on it so it was rocking quite hard – like the band playing on it 😉
It didn’t bother the playing too much, but interesting experience never the less. 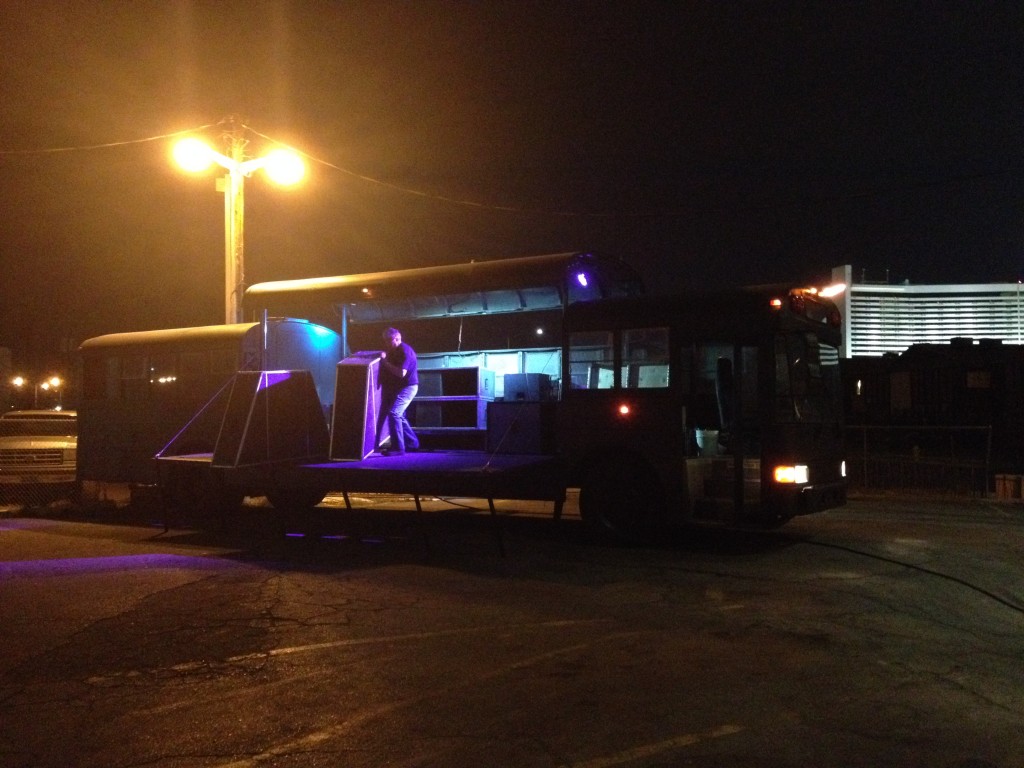 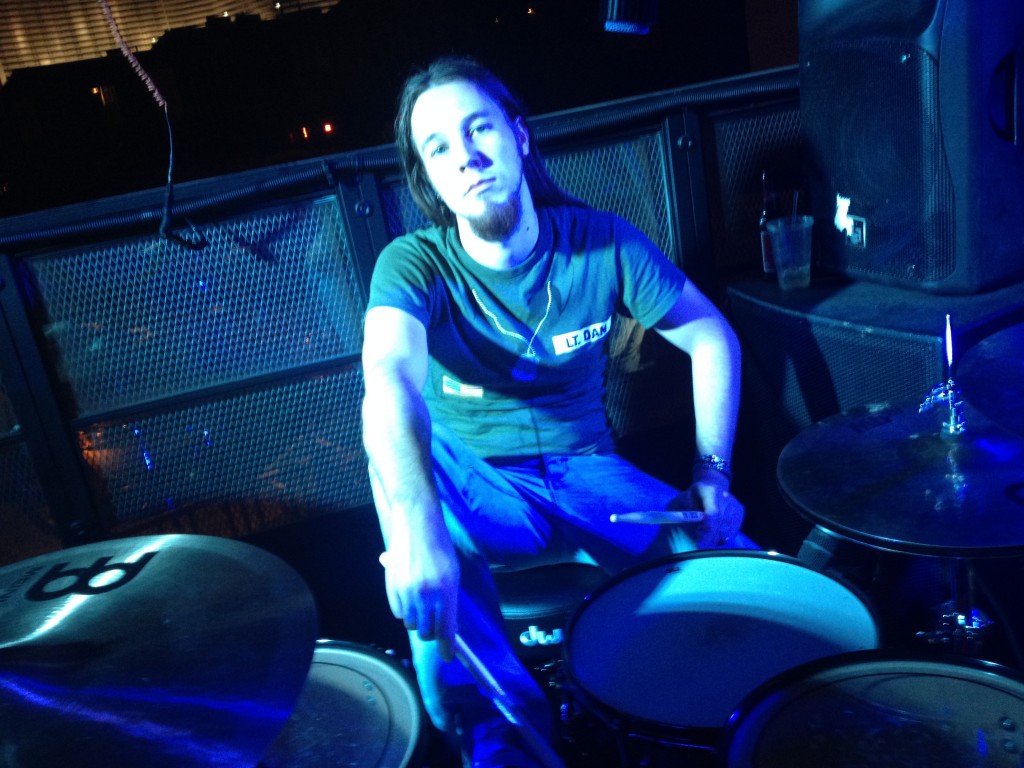 The other funny situation happened in Seattle, Washington when we were looking for a motel after our show. It was past 2am and it proved to be more difficult that one would imagine. At least 4 motels in the area had a light in the office on and the sign “OPEN” was bright light, but there was no one in there and the doors were locked.
At one of those places our singer went to try the door, but when it was locked he tried knocking… suddenly, under a huge pile of blankets on the couch in the office, a guy lifts his head up…when our singer asked about getting a room, the only reply he got was a upset hand gesture to just go away. And the guy hid under the blankets again… I’m still amazed how someone can allow missing out business like that..

And finally..since we were in Seattle, we had to drive by the legendary Space Needle 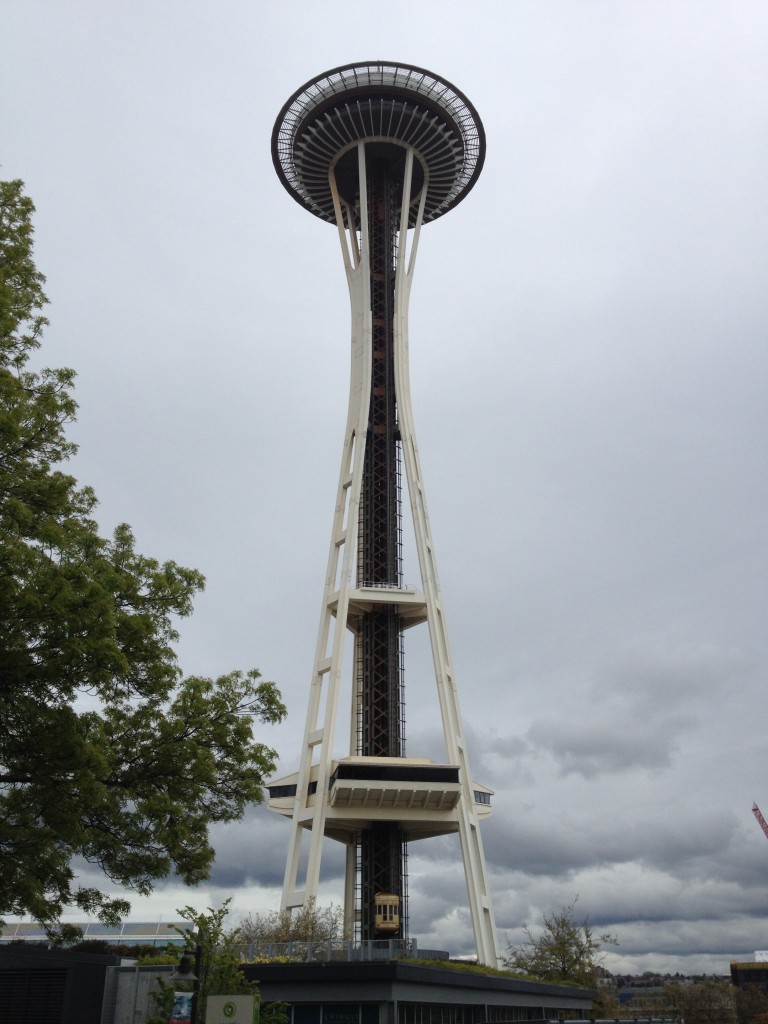 So this was my little overview on the first tour with TIJUANA BULLFIGHT. Hopefully there is going to be more of those very soon and a lot is going on with the other bands as well, so please keep an eye on that stuff and I will be most happy to see you guys at our shows.

Thanks a lot for checking it out and talk again soon!